What are UCL and LCL limits in TRENDABLE? 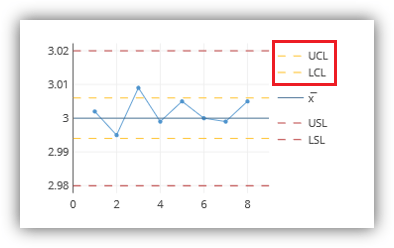 Control limits are not the same as specification limits.   Specification Limits (or “spec” limits) are set by the customer and typically cannot be exceeded without consequences.  For example, if your customer requires the part width to be 0.50” +/- 0.03, then your specification limits are USL = 0.53” and LSL = 0.47”.  If the part exceeds these limits, then it must be scrapped or re-worked.  The customer will not accept a part outside their tolerances.

*There are several different methods available for calculating standard deviation.  Consult a statistician to determine which method is appropriate for your application.

Stay up to date on the latest in quality and manufacturing.  Learn about new tools and be inspired by how stuff is made.